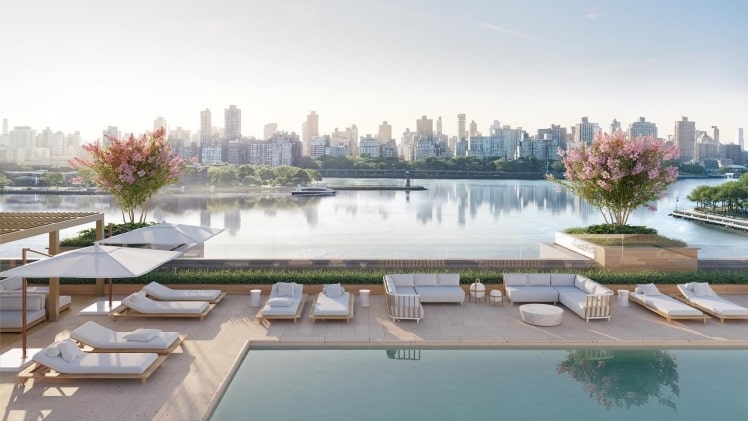 Strategically positioned along 2.5 acres of Astoria’s prime waterfront in Long Island City, Cape Advisor, in partnership with Pioneer Group, completes one of the most expansive projects in NYC; Astoria West.

Designed by Fogarty Finger Architecture, an award-winning firm, the development will comprise three buildings offering 534 residences complemented by an extensive amenity package. Their goal: deliver the residents of Queens an amenity-driven lifestyle that comes with living on the east river promenade with access to the Manhattan skyline views.

Each piece of exterior material was carefully selected to harmonize with the adjacent buildings of Astoria in Long Island City while also creating context along the waterfront. Regarding waterfront beautification, the east side is going through the same changes as the west side, and Astoria West over-delivers new features and amenities.

Each apartment is configured to vaunt generous light-filled spaces that easily accommodate oversized furniture and offer scenic views. The interior design is illuminated with rich materiality and light tones that produce a modern vibe that flows effortlessly from the six ft. windows and the exterior façade.

Boasting 40,000 square feet of amenities, residents can enjoy a wide variety of activities, from co-working spaces and a state-of-the-art fitness center to a 12,650 sqft rooftop pool club with a 360-degree view. In addition, the private central courtyard was designed for community engagement or friends and family gatherings, escaping the bustling city and noise.

The History of Long Island City

Astoria is a burgeoning area and one of the oldest and most diverse neighborhoods in Queens, New York. Founded in 1839, Astoria was later incorporated into Long Island City (LIC) in 1870, which remained an independent municipality until it was annexed to the City of Greater New York In 1898. In the 2000s, Long Island City was rezoned from an industrial area to a residential neighborhood and underwent vast gentrification.

Long Island City now contains several of the most iconic residential buildings in Queens, including Hunters Point South, One Court Square, and Queens Plaza, which sits on the western end between 21st street and Jackson Avenue/ Northern Boulevard. Astoria is now benefitting from that same residential boom and is seeing some much-needed new development come into the area. If you want to travel in the city, you can always find affordable accommodations. However, just be careful in getting a timeshare because it’s always hard to cancel or get rid of timeshares. So if you plan to get one, you should carefully decide if it’s worth getting one.

This multicultural neighborhood is known for its ethnic eateries, famous street names, architectural gems, cultural institutions, and a role in the early American filmmaking industry. The area sits just north of Brooklyn, Williamsburg, Greenpoint, East of Manhattan, and west of Woodside and Sunnyside.

A laid-back atmosphere is attributed to living so close to the East River. Life is just a little more spacious and slower than in the inner city. Still, Astoria is unique because you essentially have everything the city offers without having to live in the city. The neighborhood has always been a melting pot with rich immigrant history because of the affordability and lifestyle of living here.

With all the gentrification happening, the area is now becoming profound as the food capital of NYC. You can stroll through the site and find every culture’s cuisine on every block. Other places of interest include Astoria Park, Moma PS1, Socrates Sculpture Park, Noguchi Museum, etc.

Vernon Street, Center Boulevard, Purves St, Crescent Street, and Steinway St: Areas with some of the highest demand in Long Island City in terms of real estate. Long Island City is right across the water from Manhattan and is an extremely short commute to get in and out of the city. If you work in Midtown Manhattan and you do not want to pay the premium for townhomes or high-rise apartments, then this area is the ideal place to live.

For Convenience, these prices include units with washer and dryer hookups.

Discover one of the top Long Island City apartments on the upper east side at Astoria West. Whether you are looking for a pet-friendly studio apartment or options of 1 bedroom or 2 bedroom apartments, we have the floor plan. Take a 3d tour or stop by today at 30-77 Vernon Blvd to connect with our realty team.